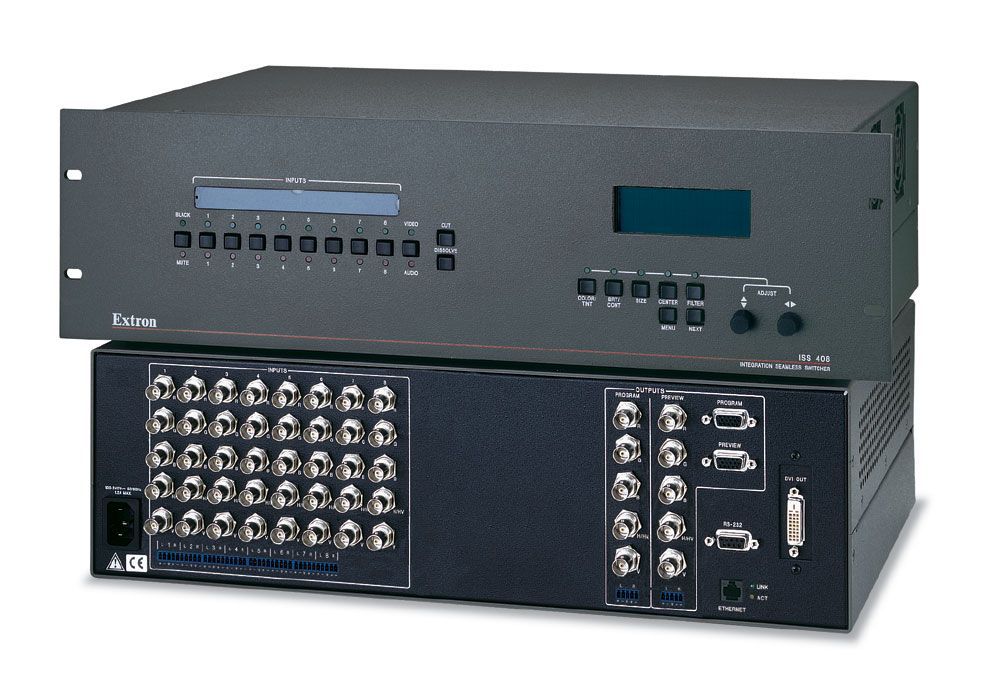 For pricing and configuration options please call or email us.

The Extron ISS 408 Integration Seamless Switcher provides truly seamless, glitch-free switching between eight inputs, each of which is fully configurable for all video types. It combines flawless switching between all video signal types and scaling with proprietary Extron technologies including 3:2 and 2:2 pulldown, DMI™ - Dynamic Motion Interpolation, and AFL™ - Accu-RATE Frame Lock. With features such as 16 auto-memory presets per input, test patterns for projector setup, and Ethernet control, the ISS 408 is the ideal solution for professional AV applications that incorporate digital projectors and displays, such as boardrooms, conference rooms, classrooms, churches, and auditoriums where glitch-free, seamless switching and professional transitions between AV sources are essential.

To deliver the most flexibility for system integrators, the ISS 408 features a Preview and a Program output. The Program output is what the audience sees. The second output is the Preview output for viewing the "next to switch" source by the switch operator on a local monitor, touch screen control panel, or other viewing device. For professional transitions between inputs, the ISS 408 offers two different effects: a seamless cut and a dissolve. Both are accessible through buttons on the front panel. When the dissolve transition is selected for a switch that includes audio and video, the switcher will cross-fade the audio inputs, which lowers the audio of the switched-out source while simultaneously bringing up the audio of the activated source.

The ISS 408 can be controlled and monitored through the RS-232 port or the Ethernet port. Ethernet-enabled AV products, such as the ISS Series, can be managed and supported by a technician or administrator at any time from any computer with a Web browser.

The ISS 408 accepts an optional output board for DVI-D - Digital Visual Interface. The DVI output enables the connection of DVI-equipped digital display devices and acts as an additional display output when the two analog outputs are fully utilized.

The Extron RCP 2000 Remote Control Panel is an optional accessory device that can be used to operate the ISS 408 via an Ethernet connection. The RCP 2000 enables a user to select inputs, change transition effects, and make adjustments to the transition duration and picture settings — all from a remote location. In addition to input, transition, and picture buttons, the RCP 2000 is equipped with a T-bar for manual control of dissolve speed, as well as a gooseneck lamp for low-light environments. The ISS 408 can be controlled simultaneously by the RCP 2000 and through RS-232, offering the user more flexibility.