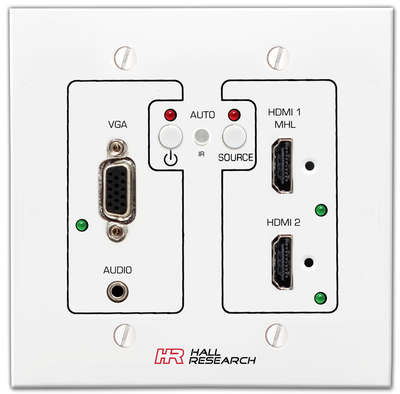 The UHBX-SW3-WP is a multi-input Switcher/Sender with HDBaseT™ output. The wall-plate accommodates 2 HDMI and 1 VGA inputs with audio.

The VGA input also accepts YPbPr Component video. The sender can manually or automatically switch between the various inputs and extends the video using HDBaseT™ standard. To control the power on/off function of the remote display, the wall-plate can generate RS232, and IR control signals which are extended using the same Cat6 cable. Virtually all VGA and HDMI resolutions are supported including 4K (UHD). 4K video can be extended to 330 ft (100m) while 1080p signals can go as far as 500 ft (150m). The wall-plate is powered through the same cable from the receiver using PoH (Power-over-HDBaseT) standard, making installations as simple as possible. The UHBX-R-PSE receiver includes a small power supply and provides HDMI, RS-232 and IR outputs.

To ensure a proper image on the display, the wall-plate's VGA input is scaled to 1080p. This eliminates compatibility issues with various notebook or PC VGA formats that may not be displayable on an HDMI TV if not scaled to a standard HDTV resolution such as 1080p. The user can also configure the unit to pass-through 3.5 mm audio input from an MP3 audio player independent of the VGA signal.

The system can manually or automatically control the power on/off function of the remote display. If a video is detected on the input, in automatic power mode, the wall-plate will issue the desired ON command, and if there is no video, it can issue an OFF command after a programmed delay. The power commands can be RS232, or IR based on the user's needs. To select the control method and to enter the commands, a USB port is provided on the wall-plate for programming using Hall Research's free Windows® GUI software. In addition, the wall-plate features an IR detector that can extend IR signal to the remote receiver. In this way, an IR remote can be pointed to the wall-plate and its signal will be extended to the TV.

The UHBX-SW3-WP complies fully with HDBaseT Alliance's design specifications and may be connected to displays or projectors with HDBaseT inputs without the external receiver. In that case, a PoH compliant power inserter would be needed to power the wall-plate.

The UHBX-SW3-WP is a culmination of Hall Research's expertise in high-definition Analogue and digital video scaling and extension technologies and is fully designed and manufactured in the USA.